OSIRIS-REx in the Midst of Stow

The mission team spent two days working around the clock to carry out the stowage procedure, with preparations for the stowage event beginning last weekend. For the spacecraft to proceed with each step in the stowage sequence, the team had to assess images and telemetry from the previous step to confirm the operation was successful and the spacecraft was ready to continue. Given that OSIRIS-REx is currently more than 330 million km from Earth, this required the team to also work with a greater than 18.5-minute time delay for signals traveling in each direction.

Throughout the process, the OSIRIS-REx team continually assessed the Touch-And-Go Sample Acquisition Mechanism’s (TAGSAM) wrist alignment to ensure the collector head was being placed properly into the SRC. Additionally, the team inspected images to observe any material escaping from the collector head to confirm that no particles would hinder the stowage process. StowCam images of the stowage sequence show that a few particles escaped during the stowage procedure, but the team is confident that a plentiful amount of material remains inside of the head.

On the afternoon of Oct. 28, following the backout check, the mission team sent commands to disconnect the two mechanical parts on the TAGSAM arm that connect the sampler head to the arm. The spacecraft first cut the tube that carried the nitrogen gas that stirred up the sample through the TAGSAM head during sample collection, and then separated the collector head from the TAGSAM arm itself.

That evening, the spacecraft completed the final step of the sample stowage process – closing the SRC. To secure the capsule, the spacecraft closed the lid and then fastened two internal latches. As of late Oct. 28, the sample of Bennu is safely stored and ready for its journey to Earth.

The OSIRIS-REx team will now focus on preparing the spacecraft for the next phase of the mission – Earth Return Cruise. The departure window opens in March 2021 for OSIRIS-REx to begin its voyage home, and the spacecraft is targeting delivery of the SRC to Earth on Sep. 24, 2023. 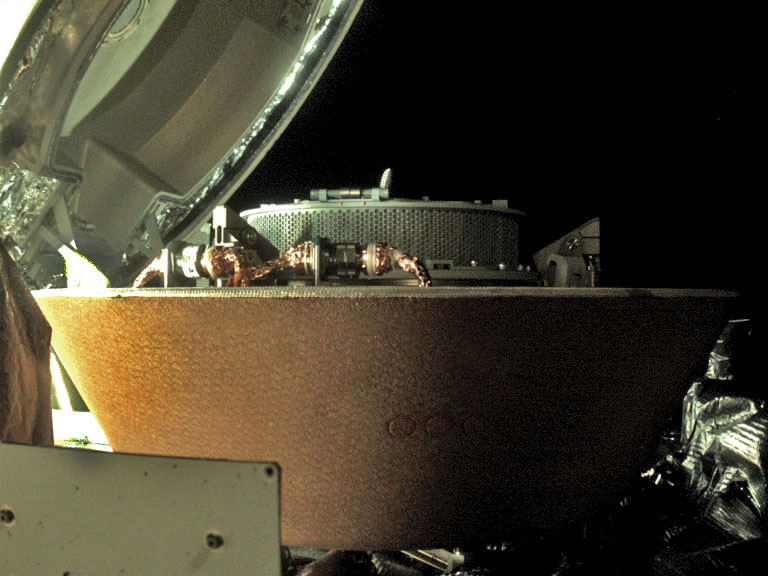 Captured on Oct. 28, this image shows NASA’s OSIRIS-REx spacecraft completing the final step of the sample stowage process: closing its SRC. To seal the SRC, the spacecraft closes the lid and then secures two internal latches. The sample of Bennu is now safely stored and ready for its journey to Earth.
Credit: NASA/Goddard/University of Arizona/Lockheed Martin

OSIRIS-REx completed its last flyover of Bennu around 6 a.m. EDT April 7 and is now slowly drifting away from the asteroid; however, the mission team will have to wait a few more days to find out how the spacecraft changed the surface of Bennu when it grabbed a sample of the asteroid.

It will take until at least April 13 for OSIRIS-REx to downlink all of the data and new pictures of Bennu's surface recorded during the flyby. It shares the Deep Space Network antennas with other missions like Mars Perseverance, and typically gets 4–6 hours of downlink time per day.

Once the mission team receives the images and other instrument data, they will study how OSIRIS-REx jumbled up Bennu's surface.

OSIRIS-REx, with its pristine and precious asteroid cargo, will remain in the vicinity of Bennu until May 10 when it will fire its thrusters and begin its two-year cruise home. The mission will deliver the asteroid sample to Earth Sept. 24, 2023.

Like boot prints on the Moon, NASA's OSIRIS-REx spacecraft left its mark on asteroid Bennu. New images — taken during the spacecraft's final fly-over on April 7 before heading back to Earth — reveal the aftermath of its historic encounter and "TAG" sample collection at the asteroid in October 2020.